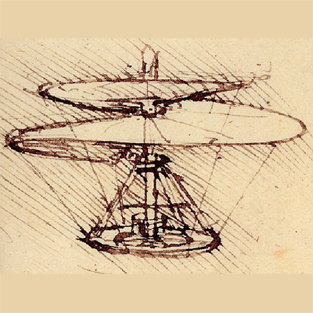 In 1493 CE Da Vinci blueprinted an aerial screw with a spiral blade connected to a platform that we today would recognise as the basic model of a helicopter. Da Vinci built a prototype paper model of this design, utilizing a small spring as a power source.

Helicopters required sufficient force for the rotor blades to take off carrying a populated fuselage. When the steam engine was being developed, engineers noticed the prospect for this technology in Da Vinci’s designs. A French inventor Gustave de Ponton d’Amecourt first built a working helicopter with a motor. He actually developed a flying device that was operated by steam power and was made from lightweight aluminium. Though it didn’t fly at all, the model was the first to use an engine.

It was the invention of the internal combustion engine that made the helicopter viable. In 1907, two brothers Louis and Jacques Bregue invented Gyroplane No. 1, which managed to lift a person for a minute off the ground. This was the first manned helicopter flight.

From the 1920s, the helicopter started to take shape and inventors developed many tools to make it sturdy as well as sophisticated. In 1942, the U.S. Army began to produce helicopters in large numbers for rescue operations. The first helicopter approved for commercial use was the Bell 206 and in 1946 it was made available for the general public.

Modern-day helicopters can hover, fly backwards and forwards and perform a wealth of aerial manoeuvres. Their flexible manoeuvrability makes them perfect for military and dangerous rescue operations in wild terrain, as flying ambulances during the war and natural disasters, and many more applications.

The first successful rotorcraft was a gyroplane, designed by Sr. Juan de La Cierva in Spain and flown on 17th of January, 1923. His success created much interest worldwide and led to the development of the first successful helicopter, the Focke-Wulf,  Fw 61 which was first flown in June of 1936 in Germany. In 1933, the Focke-Wulf Co. built Cierva C.19 and C.30 gyroplanes under license. However, in the same year, Prof. Focke was displaced by the National Socialists and he started a small company called Focke-Achgelis in which he devoted his full time to rotary wing aircraft. He conducted over 2,000 wind tunnel tests to prove his concept. He would go on to help design the first large helicopter, the Fa 223, that could lift 1,500 lbs. It had a cruise speed of 125 mph. 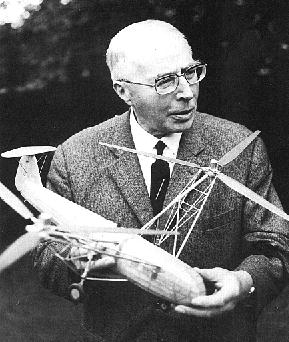 Prof. Heinrich Focke with a model of his Fa 223. Although the first Fa 223 was built in 1939, production did not start until 1942. It was far ahead of its time and was used during WWII to lift heavy canons and guns. 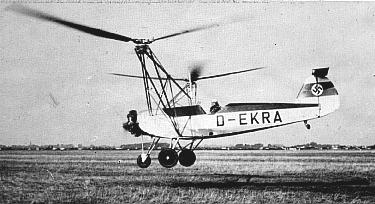 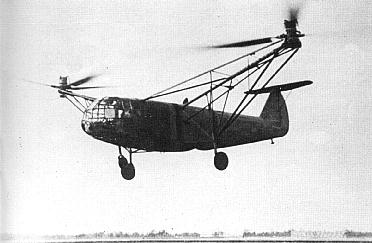 The Fw 61 with Hanna Reitsch at the controls

The Fa 223 had a gross weight of 8,000 lbs and could fly at 125 mph up to 23,400 ft. Although 47 were built, most of them were destroyed in bombing raids. The craft could be piloted with the tip of a finger. It was the first helicopter to cross the English Channel in September 1945. 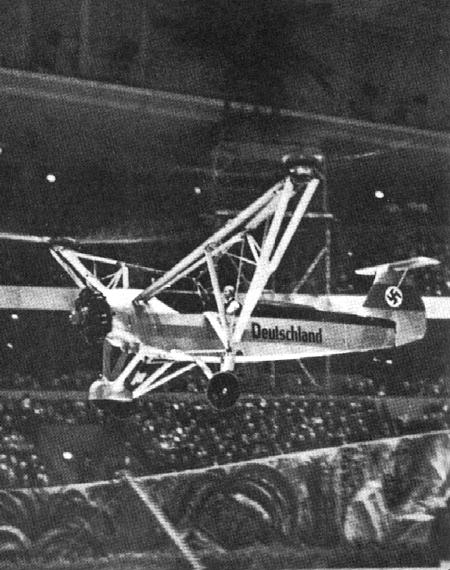 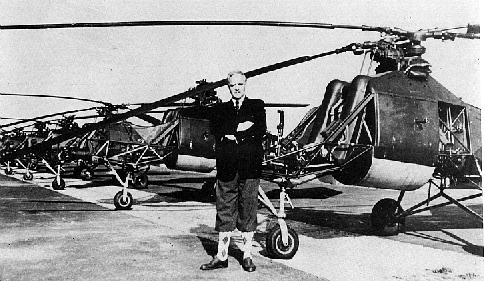 Anton Flettner in front of a production run of Fl 282 helicopters. The FL 282 helicopter was the world's first helicopter that passed certification and went into mass production. The Fl 282 "Kolibri" was ready for production in 1940. Because of bombing, only 25 Fl 282's had been built by the end of the war. However, it was the most used helicopter during WWII. 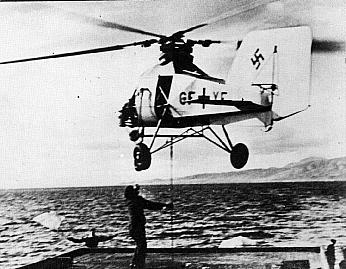 An Fl 282 Helicopter being winched to the deck of a boat. This method is still used today for landing on ships. 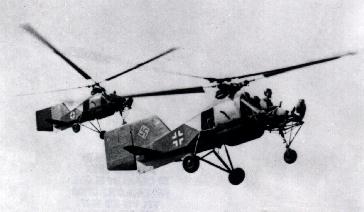 Flettners' twin intermeshing rotor system is still used today on the Kaman helicopters. These helicopters are the easiest to fly helicopters in the world. Ask anyone who has flown one. The use of a tail-rotor makes the helicopter much more difficult to pilot. 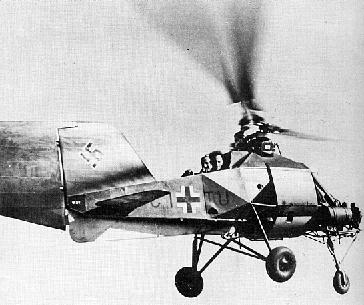 Two observers are seating in the back of a Fl 282 Helicopter for observation. 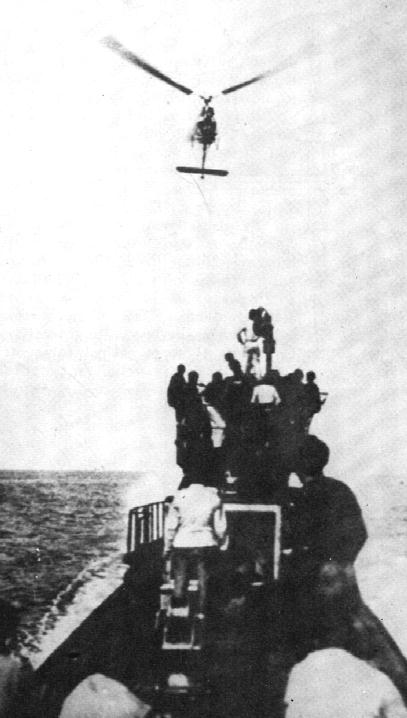 The Fa 330 gyroglider was towed on a 300 foot cable behind submarines for aerial observation. About 200 were built but the use of radar in 1943, by the Allies, made the gyroglider a risk to the operation of the submarine. Only a few were put into operation. When not in use, the glider was stored in two tubes below the deck of the submarine. The pilot had a telephone with which he could talk to the submarine captain.

The FA 330 glider was designed by Gunnar Michelson working at Focke Achgelis in 1942. Gunnar is a  friend of the web host. Living in Santa Barbara, CA. Gunnar invented film copying machines for the film industry which his son manufactures and he has received two Oscars from Hollywood for his design.